A group of militants from Islamic State of Iraq and Syria (ISIS), Nusra Front and Ahrar ash-Sham attacked Tall Maruf of Tirbespi (Qahtaniya) on early Thursday.

Tall Maruf is located 23 km southeast of Qamishli and 18 km west of Tall Hamis which is under the control of extremist groups.

The residents of village are all Kurds. Tall Maruf is a special place because it is home for Khaznawi family which is widely respected among the local population. Naqshbandi Sheikh Ahmad Khaznawi had followers throughout the Jazira Region and the Kurdish regions in Turkey. His grandson Sheikh Muhammad Mashuk Khaznawi who was abducted and killed is regarded was a symbol of Kurdish resistance against the Baathist system.

According to reports, ISIS has torched the grave of Sheikh Ahmad Khaznawi and destroyed the Khaznawi Mosque because of being a “place of idolatry” 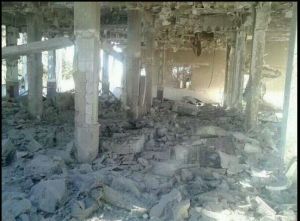 Kurdish People’s Defense Units (YPG) called local residents to leave the village so that they would not be harmed from the operation. Towards the late hours of the night local sources reported that the village was cleaned from extremists.

Reliable local sources that I contacted short while ago confirmed that Tall Maruf is liberated by YPG after heavy clashes continued throughout the night.

Just now (February 28 at 10:29 am Syria time), YPG spokesman officially announced that Tall Maruf is completely under their control.