Syrian President Basha Assad issued a decree in April 2011 to give back citizenship stripped from some 300,000 Kurds. 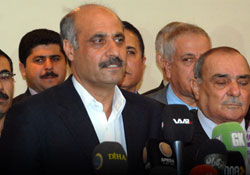 In a over-the-phone interview with Kurdish Affairs Analyst Mutlu Civiroglu on April 27, 2014, Abdulsalam Ahmed, Co-chair of the People’s Council of Western Kurdistan (PCWK) in Rojava, Syria says some 50,000 Kurds received back their citizenship.
Ahmed warns that this number is an estimate since they do not have exact statistics.
Ahmed says only Ajnabis (Registered stateless Kurds) could apply to get citizenship, but many of these people had already left Syria because of the heavy circumstances they were forced to live in.
Ahmed informs that Maktoumeen, (Unregistered stateless Kurds who do not possess even identity document and almost invisible) who number between 75,000 and 100,000 could not even apply to get their citizenship.