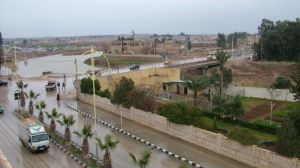 Islamic State of Iraq and Sham (ISIS) has launched an offensive against Hasakah for few days, and took control of Regiment 121, a major military installation in south of Hasakah province.

Since then Kurdish People’s Defense Units (YPG) took preemptive steps to protect the city from all directions. According to YPG sources in the city there is no ISIS presence in the city, and the suicide attack resulted death of 17 regime forces was immediately interfered by YPG before additional ISIS reinforcement arrive to the city.

As far as regime forces concerned, there is still some military presence in the city center and government building are still controlled by the regime officials. However, majority of regime soldiers are demoralized due to lacking clear motivation to fight. Local sources earlier reported that different sort of regime weapons were seized by YPG in Hasakah in last few days.

In a phone interview, Cochair of the People’s Council of Western Kurdistan (PCWK) Abdulselam Ahmed confirms that vast majority of the city is currently under YPG control. Ahmed, himself a Kurd from Hasakah, says the life in the city is normal and electricity is available in the Kurdish side of the city.

When asked about the timing of IS attacks on Hasakah, Ahmed says IS thought this as the best time to seize Hasakah as they thought YPG was preoccupied with fight in other fronts.

“Because of fierce fight in Kobane as well as Serekaniye and other regions, ISIS thought it is an appropriate time to attack Hasakah. Expecting no resistance from dispirited regime forces, ISIS was expecting an easy seizure of Hasakah. However, YPG took all necessary precautions to prevent ISIS from entering the city.”

Ahmed says it is likely that there are some ISIS supporters are in the city. “After the suicide attack they were expecting more reinforcements from surrounding villages and around Mount Abdulaziz, but thanks to YPG interference this possibility was prevented.”

In regards to YPG casualties in Hasakah, Ahmed says 3 YPG fighters lost their lives while defending the city.

“3 of YPG fighters were martyred by IS mortar attacks in south of the city. We received a news that 2 more YPG fighters martyred today, but we do not have the details yet.”

Ahmed confirms that Christians in the city asked Kurdish protection against ISIS and YPG is taking measures to protect the community.

Hasakah has always been one of the major goals of ISIS as it would allow further expansion of their control in Syria. After the group seized the control of Mosul, it wants to include Hasakah into its territories as well. Considering close ties between Arab tribes in Mosul and Hasakah, ISIS believes the city should be a part of its caliphate.

Besides, Hasakah is an important road junction near the Turkish and Iraqi borders. Main road connecting Aleppo and Damascus are passing through Hasakah. It is also an important agricultural region; wheat, rice, cotton etc.

If Hasakah falls into ISIS, Jazira Canton of Kurds, cities like Qamishli, Derik (Malikiyah), Dirbesiye, Serekaniye (Ras al-ain) and Ramalan oil fields will also go under ISIS control. Such a development will mean a big blow for Kurdish achievements in Syria.

For question and comments mutciv@gmail.com