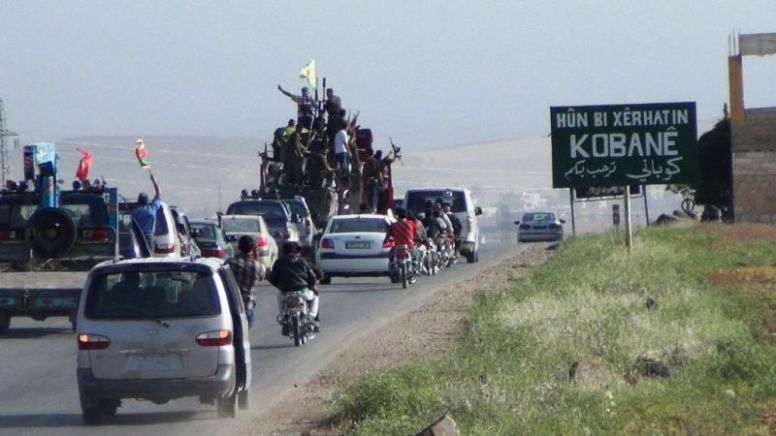 Mr Anwar Moslem, Premier of Kobane Canton in Rojava, over the recent days, the ISIS has been waging remarkably severe attacks on Kobane and its surrounding villages. First of all, please give us the latest about what has been going on in Kobane? 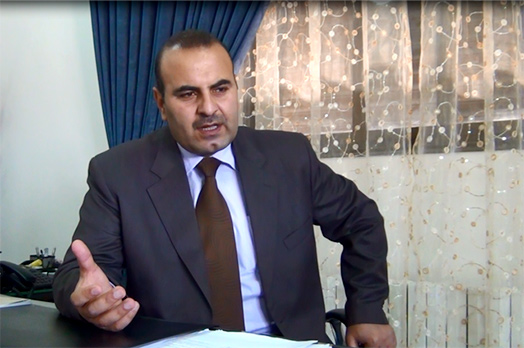 Anwar Moslem: Yes, that’s right. It is almost a year a devastating war has been waging on Kobane in order to seize it. But since two days ago, they have been waging an unprecedented attack on Kobane from east, south, and west with the tanks, artilleries, and Humvees they had seized in Mosul. They have been doing their very best to make Kobane give up. They have an intention of committing a massacre in Kobane like how they made people of Shengal flee, how they were massacred, how women were seized and enslaved, how kids were killed; the ISIS wants to inflict the same predicament upon Kobane. That’s why a remarkable resistance and bravery, led by the People’s Protection Units (YPG), is being waged against those extremist forces. But unfortunately, their heavy weaponry have caused many problems for us. Our people’s resistance, however, has been noticeable until the moment we are having this conversation.

How long people of Kobane will be able to resist in front of those heavy weaponry shown on videos?

Anwar Moslem: Kobane’s resistance had been substantiated before, and it is going on again. They are using the very sophisticated and developed American weaponry e.g. tanks, Humvees, and long-range mortars they seized in Mosul. People of Kobane are saying, as they had frequently said before, “we will resist till the last one of us gets martyred.” Indeed, there has been a historic YPG resistance; it is not sufficient, though. They are in desperate need of an international support. Kobane Canton needs support of all Kurds living inside or outside Kurdistan. The situation is extremely dangerous. If something happens to Kobane, all those who claim they care about human rights and lives will be held accountable.

You pointed to an international support. A special meeting was held in Paris; The US president, Barack Obama, has released several speeches talking about a military operation against the ISIS. Have you ever received any assistance from these forces thus far? Or, have you had any meeting with them asking them to help you?

Anwar Moslem: I am afraid we have not received any assistance till this moment. Despite what had been agreed upon in Paris and the US president Obama’s emphasis upon the attack against the ISIS, nothing has been dispatched to us so far. We hope the international community and especially the USA, Russia, France, and the UK will get started with attacking the ISIS as soon as possible. The ISIS is growing so fast and if this trend does not stop, they will be too strong to be defeated by people; and, that’s when we will witness a huge, bloody massacre. We hope that those states will come to help us through attacking the ISIS as soon as possible.

There are some accusations spreading in Kurdish media based upon which Turkey has been helping the ISIS, and a train had been sent to the border carrying assistance to the ISIS. What do you have to say in this regard?

Anwar Moslem: Based on the intelligence we got two days before the breakout of the current war, trains full of forces and ammunition, which were passing by north of Kobane, had an-hour-and-ten-to-twenty-minute-long stops in these villages: Salib Qaran, Gire Sor, Moshrefat Ezzo. There are evidences, witnesses, and videos about this. What attracts one’s attention is why the ISIS is strong only in Kobane’s east? Why is it not strong neither in its south nor in west? Since these trains stopped in those villages located in east of Kobane, we guess they had brought ammunition and additional force for the ISIS.

Well, where are those videos? How can public opinion get access to them?

Anwar Moslem: Most of our witnesses are the ones forced to leave those villages. If news agencies come to the region, we will help them meet those IDPs. If members of international organizations come to visit Kobane, they will be able to meet all those who have seen the trains. To make trains stop in villages controlled by the ISIS persuades one that something wrong is going on.

There are many reports about a couple of villages seized by the ISIS. I want to know if there is a tactic to leave those villages or not. According to the Syrian Observatory for Human Rights, the number of those villages is twenty. How many villages the YPG have lost so far, and what are the reasons for these losses? 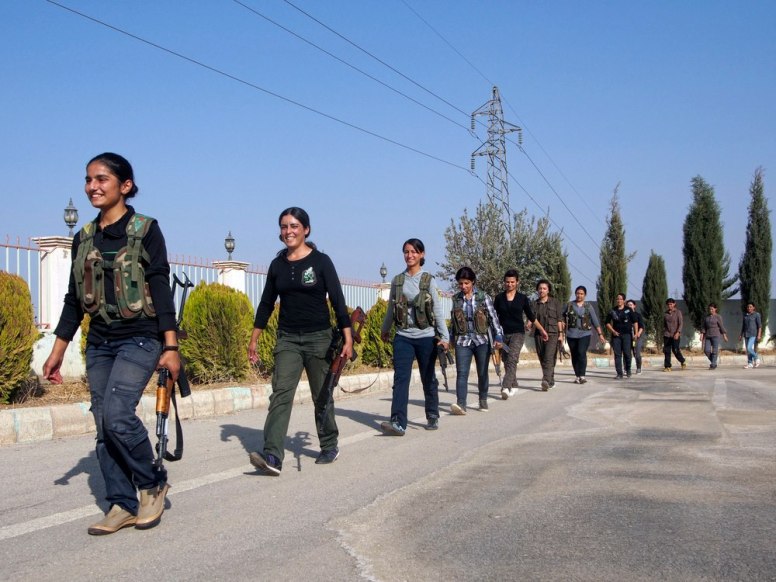 Anwar Moslem: we know how barbaric the ISIS has attacked civilians in those villages. It has been shelling those villages in order to force residents leave their villages. According to the YPG, 15 villages have been left so far whereas the resistance is still going on. Those who have left their villages are afraid of the ISIS atrocious methods in treating civilians. That’s why, they have fled to Kobane. But a severe response will be waged soon.

How far the ISIS is from Kobane city?

Anwar Moslem: They are 25 to 30 kilometers far from Kobane.

You addressed the world community. What do you have to say to Kurds?

Anwar Moslem: Kobane is the manifestation of Kurds’ will. Kobane is a part of Rojava. Kobane is a part of Kurdistan. Kobane’s collapse is Kurdish people’s collapse. And, we do not want it to collapse. We are calling upon those from Kobane living outside to come back to Kobane, center of honor and bravery, in order to protect their own people. We are calling on all Kurdish people, especially those from Northern Kurdistan [Kurdistan of Turkey), to head towards Kobane and protect their own brothers and sisters again, like they had done it before.

We are calling upon Kurds of Eastern and Southern Kurdistan [Iranian and Iraqi Kurdistan] to come and participate in this resistance. Whoever of honor and conscience, based upon their opportunity, via demonstrations, via holding protests in front of embassies of those countries helping the ISIS, they can help Kobane. These activities will inspire our girls and boys in the battlefield.

Based upon some Kurdish news agencies, those from Kobane living outside and want to go back to Kobane are facing hardships in the border line by the Turkish authorities. Do you confirm these news?

Anwar Moslem: Yes, that’s right. It regularly happens. But our people from Northern Kurdistan will also join us despite the difficulties created by the Turkish authorities. Those who want to cross the border to Kobane, they can do it one way or another despite all those hardships. But Turkish authorities must realize that if the ISIS seizes Kobane, they will soon head to Turkey. Turkish officials must take this fact into account and help Kobane and let Kobane’s boys and girls cross the borders to their own city.

I want to know the number of casualties. How many YPG fighters have lost their lives? How many of the ISIS members have been killed? Yesterday, there were some news about the high number of the ISIS casualties in the Manbij Hospital. Give us some information in this regard, please. 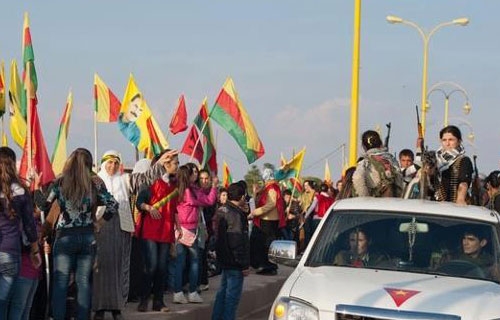 Anwar Moslem: That’s right. YPG’s heroic resistance has inflicted a high number of casualties upon them, not only in Manbij but also in Tel Abyad as well. Today, some of their wounded members were crossed into Turkey in order to get cured. We have had 8 martyrs until this moment. But, tens of their members have been killed so far.

How can it be possible? I mean, despite all their heavy attacks, why the YPG’s casualties are not high?

Anwar Moslem: The ISIS wages attacks with high numbers upon a given place. And, the YPG members resist. Since they are in an offensive and we are in a defensive position, despite our light weaponry, we inflict high casualties upon them without having many martyrs. And, sometimes we do tactical withdrawals.

What about Kurdistan Regional Government (KRG’s) support. Have you ever received any assistance from the KRG?

Anwar Moslem: We hope to be heard by the KRG. We have not received any support up until now. But we are looking forward to receiving help from our brothers in Southern Kurdistan. They have already witnessed what happened to Ezidi Kurds in Shengal [Sinjar]. Let us not allow the same massacres to take place in Kobane. That’s why we hope people of Southern Kurdistan will join this campaign in defense of Kobane.

My last question is, as the president of Kobane Canton, you visit villages. I want to know about people’s spirit in Kobane and its surrounding villages.

Anwar Moslem: Despite the heavy war going on, people’s spirit is noticeably high. The vast majority of them say they will continue their resistance before they make these attacks fail. But unfortunately, there is a small number of people who are scared of ISIS atrocities. They want to leave Kobane but a whopping majority of people, including Arabs and Turkmens, have been resisting against the ISIS and their spirit is remarkably impressive.

Again, we are repeating our call upon international forces especially USA, UK and France and others to help Kobane against the ISIS whose only goal is to annihilate all dissident peoples and religions.