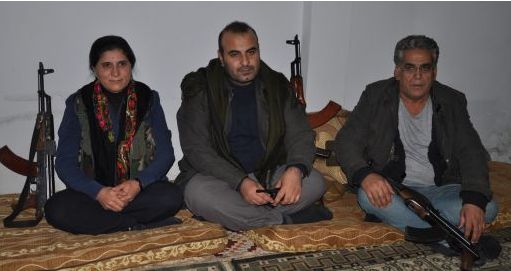 In a phone interview Cochair of the Democratic Union Party (PYD) Asya Abdullah spoke about the Saturday ISIS attacks against Kobane.

Ms. Abdullah who has been inside Kobane since the begging of ISIS offensive, says the only road reaching to the point where VBIED suicide attacks took place in Kobane is via Turkey.

“All three directions are under YPG control. We are 100 % certain that the ISIS suicide vehicle entered Kobane through Turkey.”

Abdullah warns Turkish officials that ISIS can cause serious problems for Turkey as well.

“The fact that ISIS thugs can easily move inside Turkey can cause grave political and security problems for Turkey. We are expecting a statement from Turkish officials on these attacks launched from Turkey.

Kurdish politician says despite large amount of reinforcements ISIS received from Raqqah recently, all their attempts to penetrate the city were thwarted by YPG.

Abdullah criticized some circles to falsely spread reports that Kobane is no longer under threat.

“Those who cannot accept the fact that the world stood up for Kobane spreading false news that” the situation in Kobane is safe”, and putting the lives of civilians at great danger.”