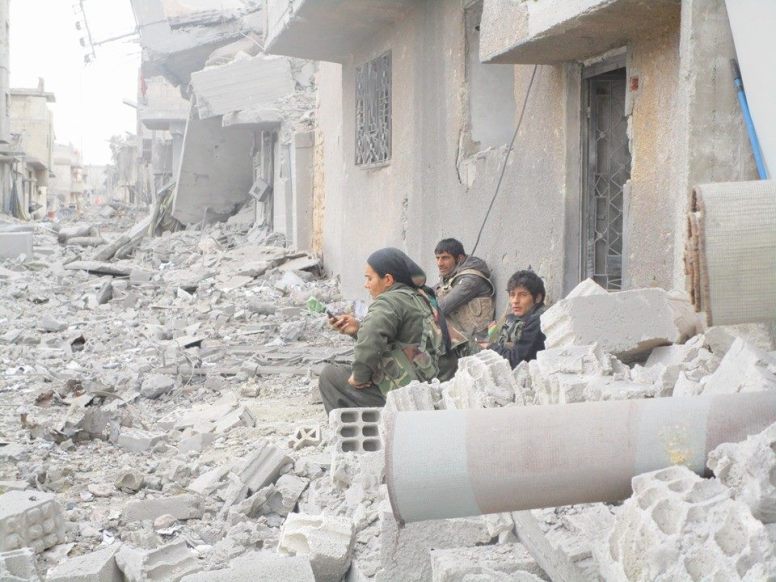 There have been some heavy fighting in Kobane these past three, four days. What is the latest update from the battlefront?

Ismet Hasan: the fighting has been ongoing these last four months, and the siege of Kobane is a historical fight. Everybody is counting the combats for only four months, but the truth is that the fight has been an ongoing struggle for one and half year to two years. ISIS brought its fighters from Iraq and Syria to Kobane center. Both the YPG and YPJ with the help of the united states and francs and its coalition has withhold ISIS back, and gain more so Kobane would not fall into ISIS hands. ISIS has the whole world has its enemy who is a terrorist organization, but the only one who are fighting them are the YPG & YPJ. I know believe that we are going to win, and the victory is going to be ours. Because it was only yesterday that with tanks and bombs from Rakka, Manbij and Bab was being brought here that YPG and YPJ fought them, and again they could not enter the city center. Our fighters will fight against ISIS till the last one, we have promised our people, our martyrs and we stand for human rights. 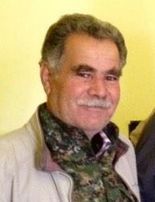 With that answered, do you believe that Kobane will be free of ISIS sooner?

Ismet Hasan: In the closest future Kobane will gain its freedom again. From the day the war started we said that Kobane will not fall into ISIS hands. Although Kobane center is freed, Kobane stretches for around 35-40 km.

Ismet Hasan: We go from street to street, from house to house and getting the city. ISIS comes continual with reinforcement teams. Their defeat means that Kobane will not be deleted. In the entire Middle East, Mosul and Rakka within a short time of period major areas and cities are of ISIS control, but the combat in a small city like Kobane will send a signal to ISIS and its members. With all their power they attack.

If I am not wrong the fight is intensified around Asayish (Internal Security) and Mishtenur Hill. How is the situation over there? 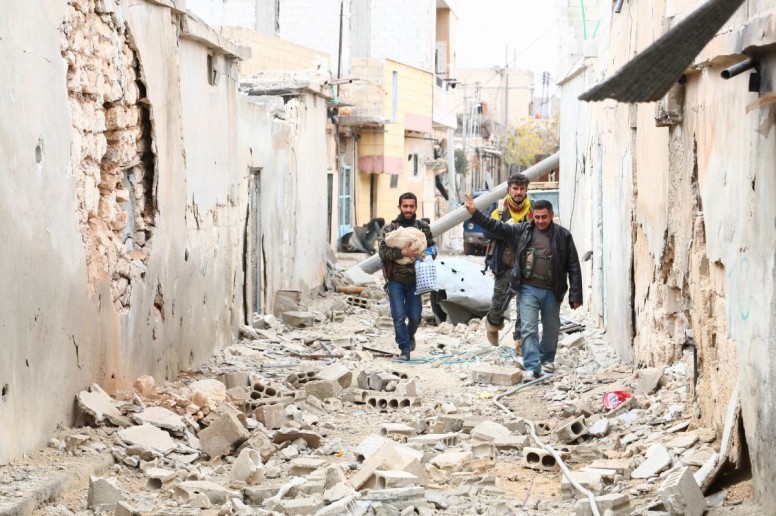 Ismet Hasan: Yes, the fighting is at the moment on the eastern front around Asayish and the surrounding area as well as Mishtenur Hill and the water pool. Many ISIS members have been killed, yesterday at the ‘Black School’. They attacked with tanks, this is a war, we still had our wounded and martyrs. I cannot give an exact number yet, but the number does not matter. The important thing is the resistance shown here.

According to the press reports 80 % of Kobane is under Kurdish control. Is that true?

Ismet Hasan: It is a war, so hard to give a certain percentage as 80 % or 70 % but now many areas are under our control. Botan Neighborhood in the eastern and western sides, Culture and Art Center, Asayish side, Municipality Building which is next to the school and the water pool is under our control.

Now that most of the city is under our control, will it be easier to have the villages under your control as well? 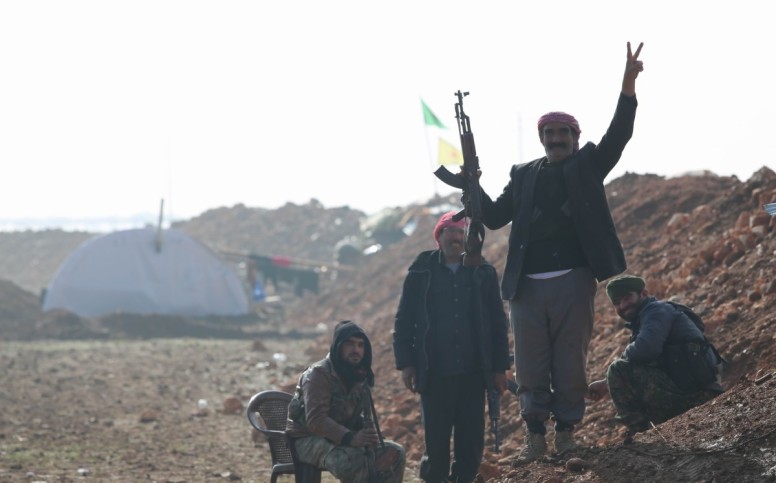 Ismet Hasan: There is a fact, that ISIS is losing a lot of its members in these fights. So it would be easier to gain the villages. ISIS gave great loses; Kobane had bodies all over the streets. 350 villages will of course see fighting, because ISIS doesn’t leave that easily. We need heavy weapons for the siege of the villages as well as the fight inside Kobane. For two years we were surrounded on all sides, we were in a situation under crucial circumstances that compel people have gathered their personal weapons. ISIS massacring innocent people all over the world, but the world should be against these gangs, who are selling woman, they should join the resistance against ISIS.

YPG and YPJ’s resistance against ISIS in Kobane is a well-known around the world. As the cantonal government, are you satisfied with the support of the international community?

Ismet Hasan: Thanks to all the countries with the coalition, mainly the United States. But just the war against ISIS cannot be completed with air strikes; there is a need of more effectively combat on land. Our primary need for this is heavy weapons. But again we thank all the people who support us, from the individual to the world around us.

ISIS is not only attacking Kobane, but the whole world as you mention. Today a magazine in Paris was a place on an attack were 12 people lost their lives in this brutal massacre. What do you want to say about this attack?

Ismet Hasan: There is no worse group that ISIS that kills innocent civilians. As the cantonal government and people of Kobane, we condemn this brutal attack and extend our condolences to the people pf France. They may be a threat for us today but they will be a bigger threat for the whole world tomorrow. France, America, Saudi Arabia, Libya that are being targeting from each side. These ISIS thugs did not receive their share of humanity, and they do not accept anything. We are the only ones who are fighting ISIS on the ground; we promise that we will carry out our struggle against them!

You as the local government set up a committee to rebuild Kobane, can you talk about the committee?

Ismet Hasan: People who are experienced in engineering, doctors, this is a committee that was established by teachers and other professional experts. This committee will determine the damage and to carry out the various damages of Kobane. They want to return to their homeland to our place tomorrow as civilians on all sides, but Kobane is left in ruins. Not a single house is left intact. Kobe needs support for the rebuild. It needs its help from all the international organizations, governments should support Kobane. 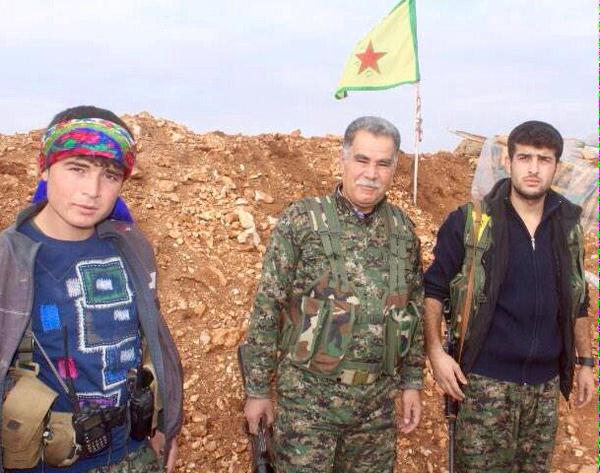 Finally, I want to ask you a personal question. You shared a photo on the internet. You are standing with your two sons; you are fighting at the front. You never lose your morale and your hope. Could you please introduce yourself to our readers?

Ismet Hasan: I’m quite excited now that you are asking me that question.  Frankly I find it difficult to talk with excitement. Less whatever he did for the country. We are human; we are fighting for our land and for our honor. Two of my sons fight in the war, and I do not regret it. My older son’s name is Kajin and the other one is named Dilgesh. Karin joined the Kurdish forces three years ago in the cantonal government in Afrin and fought against the Assad regime with the Free Syrian army. After returning home, he joined YPG. Following the recent conflict Dilgesh also signed up for YPG. My daughter joined the YPJ. We have lost everything we had, but so much to gain. This is fight is a fight for our land, our daughters, our freedom and for our honor!