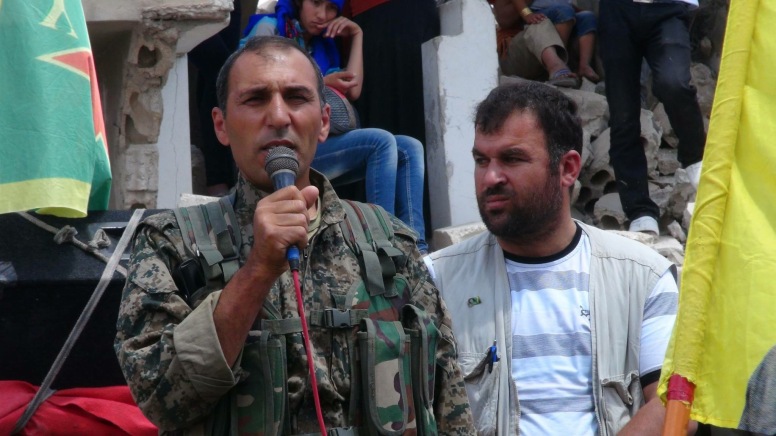 Mr. Kobani, the day before, you announced the entire liberation of Ain Isa. What is the latest situation in Ain Isa and on other fronts?

Haqi Kobani: ISIS have launched extensive operations at a number of locations in recent days. Their aim was to stop the operations we recently conducted. They attacked in Ain Isa and on all the fronts but ended up suffering a major breakdown. As we shared with the public opinion two days ago, 140 gangs were killed and corpses of 94 of them are held by our side. These figures do not include those killed within the past three days. We took Ain Isa under full control two days ago. The night after, they attempted once again for an attack but were repelled.

Some media agencies have recently reported the fall of Ain Isa to ISIS. Was this true, why was such a news spread?

Haqi Kobani: We didn’t understand yet what sort of media agencies those spreading this news are. The entire world is, unfortunately, not siding with revolution. Half of the world is supporting ISIS, while the other half is against it. They reported the fall of Ain Isa to ISIS as propaganda against us. ISIS has taken some points in recent days but the strategic points were always under our control. And, we re-seized those points back from ISIS which thereafter attempted suicide attacks with 5-6 attackers the day before. We killed them yet much before they got close to us. The ISIS thugs who can make no progress or achievement over us are being inflicted heavy blows by both the coalition strikes from the air and our offensives from the ground. They are continuously trying to keep us occupied with an aim to stop our operations and hinder us from making further advances.

Further advances towards where?

Haqi Kobani: We are on the Sarrin side at the moment and hold all the strategic points where, clashes are also taking place. ISIS is making an effort to weaken us everywhere. Yet, it is not happening as they wish.

Is the expansion of the front from the Euphrates to Hasaka not making things more difficult for you?

Haqi Kobani: Not at all. We have taken every precaution. We have organized ourselves and taken measures in accordance with the fronts.

Officials in Washington have in recent days voiced very positive statements about the YPG and Euphrates Volcano. Are you having any opportunity to follow the messages given there?

Haqi Kobani: Of course! We closely follow every single word and development. YPG has proved its power to the whole world by now. The greatest proof has been in Kobane where we believed we would succeed when there were only two neighborhoods left under our control. There is no force other than Kurdish forces that can act together with the coalition today. We have no aircraft, but the coalition is supporting us with strikes. Coalition doesn’t have a ground force, but we are a powerful force on the ground for them. This reality has also been seen by the coalition which is therefore acting together with the YPG. Everyone has seen that victory against ISIS could be achieved only this way.

You have said you are around Sarrin at the moment. What are you expecting to happen in the battlefield in the coming days?

Haqi Kobani: In this regard, we currently have no information available to share with the public opinion. We want no fuss to emerge. Yet, we will take every single area we are clashing in now, this is a truth beyond argument. No matter what ISIS may resort to do with bomb-laden vehicles; we are determined to take control of the areas witnessing a battle at the moment. ISIS has detonated 9-10 cars within the past several days. This, however, doesn’t matter as we have taken our precautions and are doing our work.

Some media reports argued ill-treatment by your side against Arabs and Turkmens. What do you have to say in this regard, what is your relationship with other minorities?

Haqi Kobani: This kind of reports appearing on media have nothing to do with the truth. We are acting on the basis of fraternity of peoples and implementing no different practices on any of them. Our aim is a democratic Syria. As we have recently highlighted in some statements, which we don’t know if reached to the media and people as we have been taking part in operations, we conceive of an operation room which consists of Turkey, ISIS and the regime. Their media agencies, Rûdaw, Orient TV, Al-Jazeera are against the revolution in Syria. Rûdaw and Orient TV pretend to be embracing the revolution here but, yet, they are against it. As we fight and achieve success against ISIS, they are writing exact opposite things. There exists a success of YPG and they are not pleased with it.

Interview with Mr. Aldar Xelil, Member of the Executive Body of the Democratic Society Movement (TEV-DEM) about the situation in Rojava and fight against ISIS .

Mr. Xelil, the US President Barack Obama said the war with ISIS would be a long one. There were also messages from him and Defense Secretary Carter for Syrian Kurds and the YPG.  How do you assess recent messages coming from Washington?

We see the messages that come from Washington are positive and it is clear that the US government and the administration of President Obama want to strike and destroy ISIS forces, because ISIS is a terrorist organization against humanity. This terrorist organization was established in the Middle East to destroy the human values. Here, we welcome any initiative to hit this terrorism and to terminate it.

In fact, if we come to what happened in Iraq at the end of the rule of Saddam Hussein; we will see that there was also a common struggle against terrorism. We can also see that the US administration reached to a firm conviction that its strength and military technologies alone are not sufficient, and there is a need to work with local forces and people to defeat the terrorist organizations. Certainly, this process will succeed especially that People’s Protection Units (YPG) has proved its strength against ISIS recently, and that it is the strongest among all other groups in Syria.

In addition, we see for years that America did not succeed in Iraq, and ISIS controlled Mosul and other Iraqi cities very easily without any resistance. The same is valid in Syria and even in Southern [Iraqi] Kurdistan Sinjar. Among all these forces, only YPG was able to show a historic resistance to ISIS. We saw that in the resistance of Kobane to which the whole world has witnessed. In total, I think that all of these reasons helped US government boldly to take such a decision and to accept the YPG as an effective partner in the fighting against ISIS. Moreover, the successful coordination, which has been in Kobane, Grespi [Tal Abyad] and Mount Abdulaziz was the biggest proof of that. Actually, we believe that if this coordination continues, the end of terrorist ISIS will be close, and the same will be to the rule of the Baathist regime, from which the Syrian people have suffered woes for decades.

Commenting on what you just said. Some accuse you of have coordination with the Baathist regime in Syria. What is your comment on that?

A: YPG is the military force of the all peoples in Rojava components: Kurds, Arabs, Assyrians, Syriacs. On the other hand, there is a political movement, which leads the Rojava revolution. This movement made its position clear towards the ruling regimes in the region, and its goal is to establish and build a democratic system and a pluralistic Syria. In order to end the dictatorial rule, a multi-ethnic civilian democratic system must be established, and I think the Syrian people realized that. Some were looking at our system from a narrow perspective and brought unfair criticisms. However now they know that it is a large force in Syria and even in the Middle East, it leads the struggle against ISIS and the Assad regime at the same time.

Actually, those people who promote rumors and propagandas against us were mainly grown up on the hands of the regime and they do politics with Baathist logic and thought. Their only goal is to take and seizure power in this country. As for us, we would like to establish a homeland and a democratic society with a developed culture in Syria where all the components of Arabs, Kurds, Syriacs and everyone live a free and an equal life. Consequently, by implementing a system like ours, the old regime will come to an end. This is clearly our position.

Lastly, what so you want to say about some media claims about the allegations of ‘ethnic cleansing’ against Arabs and Turkmens in the territories newly liberated by the YPG?

The Turkish state was behind these claims, because it could not bear the YPG victories and breaking the power of ISIS especially in Tal Abyad. Therefore, it turned to such methods to spreading lies. YPG is composed of all components of Rojava. How can a force fights and resists the terrorism can commit the ethnic cleansing against the components of the society at the same time? Actually, Turkey took advantage of the opportunity of people’s escaping from the fierce war in the first two days in Tal Abyad operation as ethnic cleansing against the Arabs and Turkmens. Furthermore, when groups of terrorist ISIS attacked Kobane at dawn and killed hundreds of civilians, these people did not say that it was a massacre or ethnic cleansing. Those [Syrian opposition] who are staying in Istanbul and promoting such allegations from there, according to the instructions of the Turkish government. For our part, we say about these allegations that they are false because we have Arab, Kurds, and Assyrians martyrs. And YPG will not fight any people but ISIS.

Translated into English by Abdulselam Mohamad