Political tensions are mounting once again in Syria as Damascus prepared to send troops into Afrin, where the Turkish military has launched a large-scale operation against Kurdish militants, the People’s Protection Forces (YPG).

As news of the possible deal between Damascus and the Kurds broke, Turkish Foreign Minister Mevlut Çavuşoğlu warned that no one would stop Turkish troops should Syrian forces enter the enclave, in a barely veiled threat of confrontation. Turkey’s main share index fell on the news.

Turkey, the United States and Russia, as well as Syrian President Bashar Assad and the Kurds, are vying for control of northern Syria, ratcheting up tensions in a seven-year war, after the virtual defeat of Islamic State. The area, home to a mixture of Kurdish and Sunni Arab minorities, is strategically adjacent to Iraq and Turkey, with important oil resources.

Forces loyal to Syrian President Bashar Assad will enter Afrin in the coming hours after reaching an agreement with Kurdish forces, Syrian state media said. Syria woukd also re-establish a military presence along the border with Turkey, which has actively supported a range of armed groups intent on overthrowing Assad’s government, including the Free Syrian Army (FSA), deployed against the Kurds, it said

“If they (the Syrians) are entering to protect the YPG/PKK, nobody can stop the Turkish army,” Çavuşoğlu said at a news conference in Amman, Jordan.

Militants of the Turkish-backed FSA in Syria

Turkey has rejected any talk of Assad retaking the border, saying his government has courted and supported the Kurds against Turkey.

President Recep Tayyip Erdoğan ordered Turkish troops into Syria on Jan. 20, saying an operation was needed to cleanse the area of Kurdish militants allied with the Kurdistan Workers’ Party (PKK), which has fought a three-decade war for autonomy from Turkey at the cost of about 40,000 lives, most of them Kurdish.

Russia, however, is concerned about possible clashes between Turkish and Syrian troops should Syria’s army be deployed, and has approached Turkey to negotiate a possible deal, according to Timur Akhmetov, a journalist and researcher for the Russian International Affairs Council.

The deployment of Syrian troops would come just three days after U.S. Secretary of State Rex Tillerson visited Ankara and agreed with Turkey to set up working groups to deal with differences between the two NATO allies over Syria. Washington has opposed the Turkish incursion, saying it threatens to de-stablise Syria further and hurt the fight against Islamic State (ISIS) — the Kurds are the most powerful allies as the West does battle with the group.

Moscow, which has benefited from a closer relationship with Ankara as ties with the U.S. frayed, could now close Syrian airspace to Turkish jets, leaving Turkish troops exposed on the ground, Ash said.

Turkey has broken international law by occupying Afrin after it realised its support for Islamist terrorists flowing across the border from Turkey failed, Bouthaina Shaaban, an aide to Assad, said on Monday, according to Turkish news website Gazete Duvar.

Mutlu Civiroglu, an expert on Kurdish affairs, said the deal between Damascus and the Kurds isn’t done, though may be signed in the coming hours. 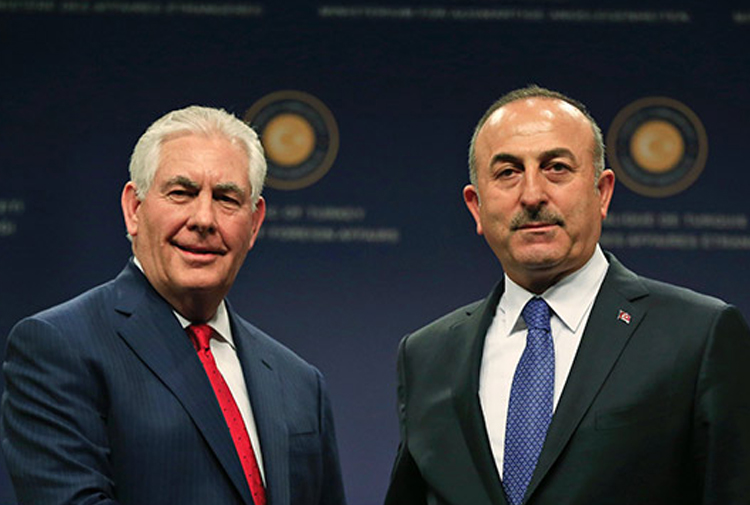 Afrin is a district as well as a city that is 40 Kilometers to the North West of Aleppo, and it has become part of self-autonomous rule since its establishment in 2012. Later it became part of the Democratic Federation of Northern Syria, declared in 2016.

The region’s population was nearly 500,000 before 2011. It is comprised of many towns and circa 380 villages. After 2011 and due to massive military operations between the regime and the opposition in nearby Idlib and Northern Aleppo suburbs, in addition to the fall of opposition-controlled areas in Aleppo city to the regime in December 2016, the area was considered as a safe haven for Internally Displaced Persons (IDPs) from many areas all over Syria. The number of IDPs is roughly 250,000, in addition to many families from the region who used to live in Aleppo before 2011. The current unconfirmed number of the civilians in Afrin region is around 800,000 people including IDPs.

Despite many battles between the SDF that control the area, and some Islamist groups (including AQ’s Nusra front) and other armed groups, the SDF maintained its control over the region since it took over in 2012.

The Turkish state and some Islamist groups have started a military attack on the 20th of January 2018 with an intensive bombardment by Turkish warplanes targeting military sites and civil ordinations in Afrin.

Major attacks from the border with Turkey, starting from Turkey’s soil, are targeting the Northern, Eastern and Western areas of Afrin region, causing massive displacement within the region and many civilian casualties according to UN; until now more than 16.000 have been displaced since 20.1.2018

Due to the bombardments, humanitarian violations on civilians and displacements the area is facing a humanitarian crisis and disaster.

There are grave concerns for the civilians who are in the remote areas and who lack access to healthcare, shelter and food.

The Turkish military attack does not only target Afrin, but they also 2 target the Kobane and Jazira cantons.

At 3:45 p.m. 5 Asayish forces in name of (Abduletif Ibrahim 32 years old-Ahmed Husni Abdo 37 years old- Melaz Alafo 22 years old – Mamo Jemo 30 years old) came to the trauma stabilization point of KRC with symptoms of (Nausea- vomiting- difficulties in Breathing- partially unconscious) . Those five Asayish members were protected inside a cave, and a rocket targeted the front side of the cave after they were protected inside.

KRC team who registered those cases has been trained in the chemical response in Raqqa battle for such attack, based on WHO standards and in project under Echo support in Raqqa governorate. The team could not analyze the situation very well according to the team leader Jamila Hame, but they get the PPE anyway for protection and decontamination procedures.

The fear of a chemical attack stems from the fact that the Turkish state considers the Kurdish forces in Syria as part of PKK, and before now Turkey in many periods used chemical weapons against PKK in Turkey.

The Asayish forces group those were in a cave in Rajo , they came to KRC casualty collection point with symptoms of nausea, vomiting, and difficulties in breathing

THE CAUSES OF IMMIGRATING TO AFRIN PROVINCE

Afrin is located in the northwestern corner of Syria, and it is 60 Km away from the Aleppo province. Immigration to the province began since the beginning of the crisis in 2011 because of the clashes between the Syrian regime and the free army. With the intensification of the conflict, the influx of refugees to the province increased to more than 300,000 IDPs from various Syrian regions near Afrin (such as Aleppo, Hamma, Al-Raqqa, Idlib, Kobani, Izaz, Al-Tabqqa, Ihzer, Tel Hasel, Tel Aaran, Kefr Naya) and other regions.

IDPs distributed to the villages, cities of Afrin and the shelters as follows:

One of the most important reasons that led people to move to the province is the security and peace in Afrin and the relatively easy access to Afrin, albeit being in proximity to the area of conflict.

Afrin has been a region in which predominantly Kurds were living. Since the start of the war it has become a mosaic of ethnic/religious diversity as refugees from many neighboring cities have turned to the region for aid. The self-administration helped facilitate the entry of IDPs into the province. This has led the IDPs to integrate into society and lead a normal life without discrimination.

After a significant increase in IDPs numbers the self-administration has decided to create Rubar camp near Al-Basela village in Sherawa area. However, the continuation of the Syrian crisis and the attacks of the Turkish state has increased the rate of immigration to the camp. Because the capacity to take in IDPs had to be increase, it was necessary to quickly initiate the establishment of Al-Shahba camp near Kashtar village in the Sherawa area.

Rubar camp is located in the east of the Afrin canton, about 25 kilometers away from the center of Afrin city. The camp was finally established on 27/9/2014 with a preliminary capacity of 100 tents, providing 575 families a safe place for the Syrian refugees fleeing from the death specter around the conflict area (Tal Rafat, Maraa, Shekh Issa, Babis, Al-Bab, izaz, Kefr Naseh, Aleppo and its western countryside, Al-Qunitera, Hamma, Humus, Tabqa, Idlib and Damascus countryside).

Unfortunately, the Turkish state has purposefully attacked the camp with missiles more than once, and the children of the camp came out objecting to the bombing on 30/7/2017. On 18/1/2018 the camp was hit by shrapnel which came from Turkish invaded territory. As a result, at least seven families left the camp for fear of their lives, being yet again running from war.

The camp is located on the southeast of Afrin, about 25 Km away from it. The self-administration has established this camp on 14/7/2016 after the Turkish state attacks on the northern Aleppo countryside. The clashes continue around the camp between the opposition and ISIS.

Heyva Sor a Kurd (the Kurdish Red Crescent) is aiming to organize aid and support for people of Afrin. Under the actual urgent situation, the only organization providing humanitarian aid in Afrin is our institution.
HEYVA SOR A KURD

Heyva Sor a Kurd is a Kurdish institution carrying out humanitarian aid activities in light of universal values and principles with the aim of providing help to anyone who suffers war, disaster and poverty regardless of their ethnicity, religion and political preferences.

At the moment we are aiding the civilians bombardment of invasive Turkish war planes and transferring the wounded civilians from the war hospitals and medical centers.

Dairy products for babies and children.

International solidarity is needed more than ever to bring the current humanitarian disaster in Afrin to a halt. We are inviting international organizations and actors to support Afrin today.