Tactic is to advance into Arab-majority areas and drive a wedge between YPG-controlled territory, observers say. 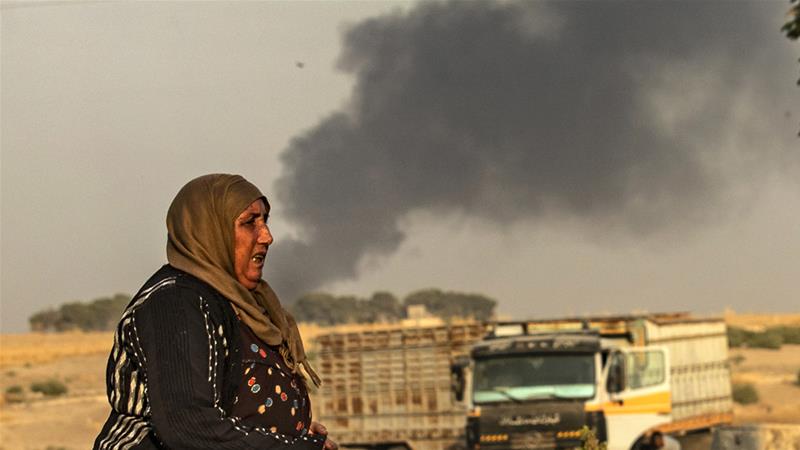 The long-awaited operation launched by Turkey into northeastern Syria extended far beyond what was initially expected by military observers who predicted Ankara would likely embark on limited action.

In the first hours of Operation Peace Spring, Turkish air raids across the border reached as far as Qamishli in the east and further west of Kobane.

“I think that’s quite a smart choice for Ankara because of the fact that Turkish troops will be more welcome in Arab-majority areas, given how friendly Turkey has been towards the Arab population,” Cagaptay said.

He said Turkey will continue to drive a wedge between Kurdish-controlled territory as a strategy to undermine the Syrian Democratic Forces (SDF) and weaken the political authority that controls the border region with Turkey.

The SDF is spearheaded by the People’s Protection Units (YPG), which Ankara considers to be linked to the outlawed Kurdistan Workers’ Party (PKK) that has operated inside Turkey for decades. The PKK has been branded a “terrorist” organisation by Turkey and several other countries.

The SDF, while not wanting to comment on specifics, told Al Jazeera it was reviewing Turkish military strategy during Olive Branch to map out a response to the current operation.

According to local activists on the ground, the number one target for Turkey is the Arab-majority town of Tal Abyad, where Ankara hopes to quickly establish a ground presence.

Turkish security analyst and former special forces soldier Necdet Ozcelik told Al Jazeera he expects the first phase of Turkey’s operation will only last about 10 days, or a couple of weeks maximum, with the goal to take control of the area between Tal Abyad and Ras al-Ain.

Civiroglu said two scenarios were likely to unfold: Turkey intensifying ground operations, or the operation being halted because of condemnation from the international community.

“The SDF always wanted good relations [with Turkey] … Kurdish sympathy is very strong, that’s why there’s strong diplomatic efforts to put an end to this.”

The possibility remains that Syrian government forces of President Bashar al-Assad may try to capture the main city of Manbij, if the United States decides to withdraw its troops from there without giving early warning to the Turks.

“In this case, the Syrian army may try to capture Manbij before the Turkish forces or the FSA,” Ozcelik said.

“We might be seeing some sort of tension, or maybe limited confrontation, between the FSA elements and the Assad regime forces in Manbij area, but not in the eastern part.”

The SDF responded to Turkey’s military action with artillery attacks and rockets fired into Turkish territory.

SDF spokesman Mustafa Bali said on Twitter the Kurdish fighters would not allow Turkish troops to advance further. “We will use all our possibilities against Turkish aggression,” he said.

Ozcelik said the Kurds were no match for the advancing Turkish-led forces.

“The YPG elements are composed of a lot of PKK ideology people, and they forcibly recruited many people who did not have serious military experience,” he said. “I’m expecting a lot of defections from the YPG side, so the Turkish military is going to take advantage of that.”

Robert Wesley of the Terrorism Research Initiative told Al Jazeera that Turkey will also suffer setbacks considering how vast the area is that it wants to control.

“It will require huge amounts of direct military engagement from the Turkish side,” Wesley said.

“The use of the FSA, that will also be limited [because] these groups are not really well-trained. They don’t have a strong track record with more sophisticated defences.”

Turkey may not have the appetite for sustaining significant casualties, Wesley said, which a serious military encounter with the SDF would necessitate.

“I don’t think either side is particularly well prepared for the engagement,” he said.

The biggest challenge for the SDF is not having a weapon system that can counter Turkish air attacks, Civiroglu said.

“[Even so] they have said they will defend themselves until the end,” he noted.

The Kremlin said it would not interfere further in Syria after years of supporting Assad’s forces against rebel groups, but cautioned Turkey not to take any steps that would destabilise the region.

Cagaptay said Moscow has no choice but to back Turkey’s move. “The most Russia will do is to voice support behind closed doors, even though they may publicly criticise the operation,” he said.

He said the Kremlin may even be welcoming Ankara’s military action.

“The [Syrian] regime and Russia consider Turkey a threat, so by provoking Turkey to attack Kurds really Russia is hitting two birds with one,” Cagaptay said. “Hitting Kurds, trying to make Kurds dependent on Russia, at the same time allow Turkey to suppress the Kurds, not allow them to make gains.”

Even if Turkey is successful in securing its so-called “safe-zone” to return about two million Syrian refugees, there will be major challenges ahead, observers said.

The complex issue of containing the Islamic State of Iraq and the Levant (ISIL or ISIS) fighters who are still active in the region must be addressed by Turkey.

As seen by the suicide attack claimed by the armed group in Raqqa on an SDF intelligence base, killing 13 people, ISIL may be defeated militarily but sleeper cells are still prevalent.