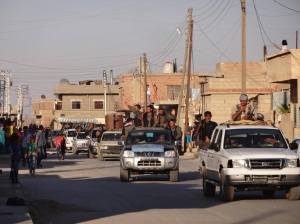 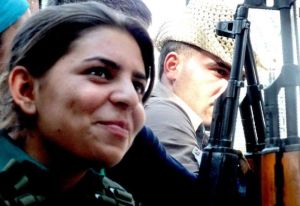 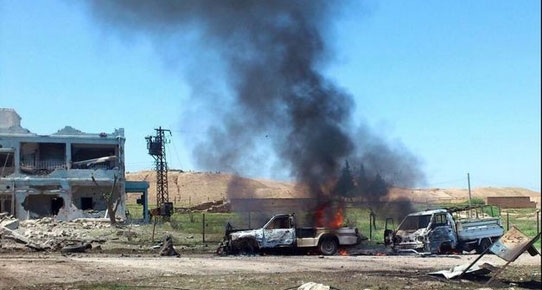 In this Interview with Rudaw, Polat Can, Head of the Information Center of the Kurdish People’s Protection Units (YPG), says that Islamist groups are attacking from many fronts in order to include the Kurdish areas in their proposed Islamic state.

However, says Can, the YPG has withstood the attacks and killed hundreds of fighters from these groups. According to Can, the Islamic State of Iraq and Syria (ISIS) is waging its war on Rojava with the support of the Syrian regime.

First of all, can you tell us of the latest situation of the ongoing fight against the Islamic State of Iraq and Syria (ISIS), especially around Kobane (Ain al-Arab) and other towns?

Polat Can: As you know there have been fierce clashes between the Kurdish People’s Defense Units (YPG) and ISIS gangs. Their purpose is to occupy the Kobane Canton and putting an end to the freedom Kurdish people are enjoying in Rojava. They wanted to include Kobane into their Islamic state. That is why they launched broad attacks against Kobane from the east, west and south. They attack us with the support of the Assad regime, and also Turkey is turning a blind eye. However, thanks to the heroic resistance of the YPG and people of Kobane, the intensive attacks of the ISIS were repelled and they were defeated.

During those attacks the ISIS suffered more than 400 causalities some of whom were senior leaders. In clashes around Girkendal, Ashme and Dilkino villages as well as the town of Sirrin, ISIS gangs suffered big losses, and could not reach their strategic goal which was separating the Kobane Canton from Jazira and Efrin Cantons. In order to isolate Kobane and prevent the YPG from receiving reinforcements from other regions, those gangs wanted to open another front in Jazira in Tirbespi (Qahtaniya), Derik (Malikiyah), Jaz’a and Sarekaniye (Ras al-Ain). In Jaz’a our forces killed number of senior ISIS commanders of the Hasakah region including Abu Maria, Abu Yousef, Abu Ma’az al-Ansari, Abu Faruq Omar al-Turki.

They attack us with the support of the Assad regime, and also Turkey is turning a blind eye.

Also, on the Sarekaniye front, they suffered severe casualties. They wanted to attack some villages—that the YPG had previously liberated—to open a new front there, and prevent the YPG from advancing towards Kobane. As a result, they launched a huge attack on Manajir and Tal Khanzir Xinzir regions. Not only did the YPG successfully repel their attacks, we also liberated some more villages. The ISIS’s intense attacks against Rojava were defeated by the YPG and I can clearly say that Kurdish people’s resistance has gained a strategic victory.

You said that over 400 ISIS members were killed by the YPG. Some say that this number is exaggerated. Did you really kill that many ISIS members?

Polat Can: It is our principle to avoiding exaggeration or misinformation. When a comrade gets martyred, we declare it publicly. We will openly announce the true number of our losses and publish their photos. We hold official public funerals for our martyrs. As for the mercenary groups we kill, we decided not to publish any pictures of their dead bodies. But, if any media wants to see those photos, we are willing to share the photos we have with press. Besides, the ISIS and others also announce the death of their members on their websites and via Facebook and Twitter. They also publish pictures of their own casualties through the Internet. There is certainly no exaggeration in our figures.

I want to remind you that these mercenary groups came to Kobane from other regions such as from Latakia, Idlib, Aleppo, Deir ez-Zor, and Raqqah. They come from a wide range of countries including Chechnya, Turkey, Azerbaijan, Libya, Tunisia, Qatar, and Saudi Arabia. So, the figure of 440 is not an exaggeration. It is precise and certain.

What about YPG losses?

Polat Can: In these clashes 35 of our comrades got martyred. We declared them all with their names and pictures. Our martyrs are the children of the people of this region. Their deaths are publicly known and cannot in any way be hidden.

You mentioned that ISIS members come from other regions to fight the YPG with the help of the Assad regime. Some experts are not convinced that Assad is supporting the ISIS. Also, there is a common notion that Turkey is no longer actively supporting extremist groups as it used to. How do you comment on these two points?

They come from a wide range of countries including Chechnya, Turkey, Azerbaijan, Libya, Tunisia, Qatar, and Saudi Arabia.

Polat Can: We should, first, look at who is benefiting from those attacks against Rojava? The answer is the ISIS and the Syrian regime. The Assad regime does not want the Kurds to make any advances. As you know, numerous units of the Free Syrian Army (FSA) were defeated by the ISIS. These days, many FSA fighters have taken refuge in the Kurdish regions. In many fronts the YPG and FSA forces are fighting side by side against extremists. It is not in the regime’s interests that Kurds are powerful and that Rojava remains safe. Furthermore, the regime wants to play Kurds and the FSA-related groups off against each other. We have some certain intelligence in this regard.

It has been several months since the ISIS forces have not fired a shot against the regime forces. Plus, regime warplanes have bombed so many civilians in Aleppo, Idlib, Homs and other places, yet not raided any of the ISIS military bases. The public should know that most of the ISIS fighters attacking us came from Deir ez-Zor, Shaddadeh, and Markadeh, passing through Kawkar Mountain in Hasakah. If the regime forces wanted, they could have easily shelled and exterminated them all. But, they did not.

As for Turkey, the leaked tapes of [Ahmet] Davutoglu and other Turkish officials revealed their plan to invade and occupy Rojava. What the ISIS is doing serves Turkey. Ankara thinks it is not in its interests that its neighboring Kurds establish their own government, make progresses, and run their own affairs. They continuously use a negative rhetoric against us. Besides, Turkish soldiers, sometimes, evacuate their border outposts to let ISIS pass through and attack Kurdish villages. We have proof in our hands about this.

Now, on the border between Rojava and Iraqi Kurdistan, some trenches are being dug and some demonstrations are being held against it. However, the Kurdistan Democrat Party (KDP) officials say that the trenches are to prevent terrorists from crossing into the Kurdistan Region. How do you comment on this statement? What do you think these are trenches for?

Polat Can: Those trenches are disgrace! After the Sykes–Picot Agreement was signed and Kurdistan was partitioned into four parts, no trenches were dug. Between the state of Syria and Turkey there were no trenches dug. They planted mines and fenced the borders. Similarly, even when the Baath regimes in Iraq and Syria were on worst terms, they did not dig any trenches; they had just raised the soil on the border.

Today in the Jazira Canton, there is a Kurdish administration. On the other side, there is another Kurdish administration. It is a pity that the KDP is building such a thing. KDP’s statements about these trenches are not convincing at all. On the Rojava side of the border, there are YPG forces, so the border is protected. Until now, no one has ever witnessed any terrorists crossing into Zakho from Derik! Such statements are baseless allegations. Terrorists they are talking about use Sunni Arab regions while crossing the border!

In the region where trenches are dug, poor Kurdish villagers cross the border in order to buy some basic needs such as food, medicine, gasoline and necessary stuff. Digging these trenches is a political decision which aims at deepening the existing embargo and further isolating Rojava.

My last question is about YPG’s call for support against the ISIS attacks, and reactions to this call. It was widely reported in the media that people have actively responded to your call, but what about the political parties, especially those who are in the Syrian Kurdish National Council (SKNC)?

Polat Can: First of all, I would like to mention that Murat Karayilan made an appeal in Newroz and asked the Kurdish youth from Northern Kurdistan (Bakur) to support Rojava. We want to thank him for that stance. Many Kurdish parties from Northern Kurdistan and other parts made statements in support of Rojava, but not much in terms of direct help. But, many youth from northern, southern, and eastern parts of Kurdistan arrived Rojava, and they are now active within the YPG ranks.

On the Rojava side of the border, there are YPG forces, so the border is protected.

From the North, especially from Urfa some youth joined YPG. People in Kobane and Urfa belong to same tribes and they are relatives. Also, the proximity makes it easier for the youth of Urfa to cross to Rojava. Some grab their guns and cross from their villages into Kobane villages and fight with us. Some others support us by bringing medicine and other things. The Kurdish people have shown their support for Rojava and responded positively to our call and stood with us.

What about political parties?

Polat Can: The stance of political parties in Kobane or their regional organizations in Kobane was brave and deserves appreciation. Many party members joined the resistance although their parties did not have central decisions on this. The Syrian Kurdish Democratic Unity Party (PYDKS) which is a KNC member positively responded to our call for support. Party leader Mohieddine Sheik Ali’s call was very meaningful when he asked his party members to actively support the YPG and defend Kobane. Jamal Sheikh Baqi’s Kurdish Democratic Party also actively responded to our call. Their members are currently fighting with us. Some members of the KNC parties were disappointed that their party headquarters were insensitive to the attacks against Kobane. This was the case with the Al-Party whose members left the party and KNC and joined the resistance. Such decisions clearly showed that, not only we were disappointed about the stance of the KNC to the recent events, but that their own members were disappointed too.

We want everyone to know that the YPG is the protector of Rojava, and the success of Rojava is the success of all four parts of Kurdistan. With the help of our people we are sure that we will succeed.

My comments on KNN TV, an Iraqi Kurdistan based TV channel, on the situation in Rojava