YPJ General Command Statement on the ‘Capture and Inhuman Treatment of YPJ fighter Çîçek Kobanê’
“Our injured comrade’s life is in the great danger. This is obvious from the brutal videos which have been spread by the jihadist gangs completely openly before the eyes of the world 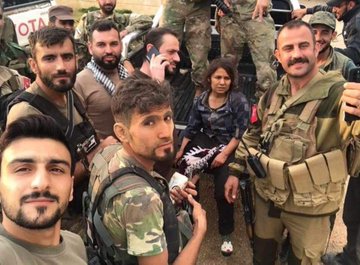 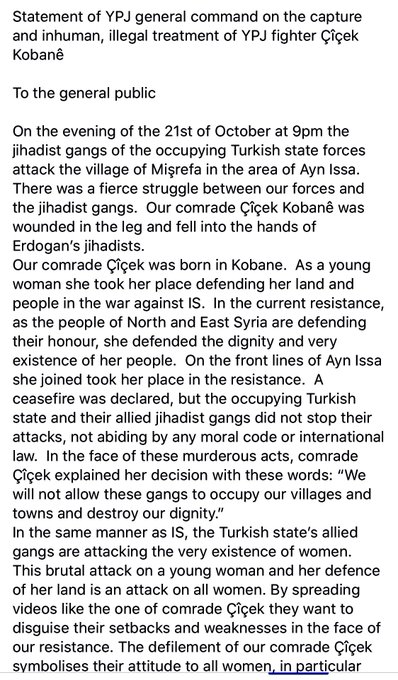 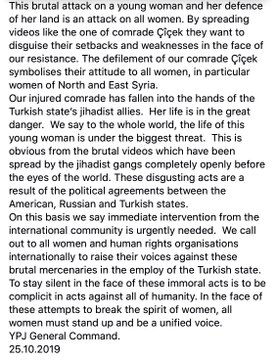 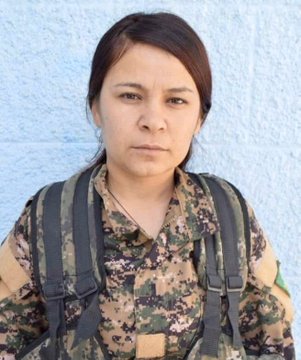 This was the video shared by these group yesterday 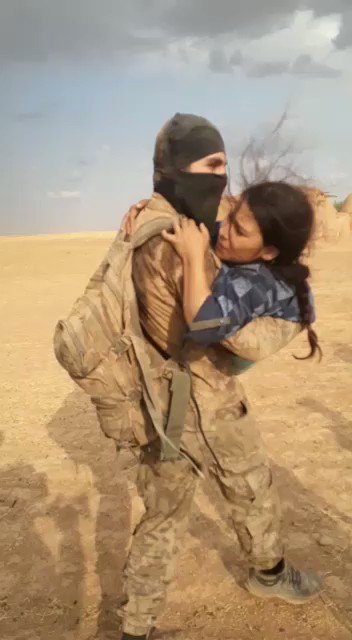 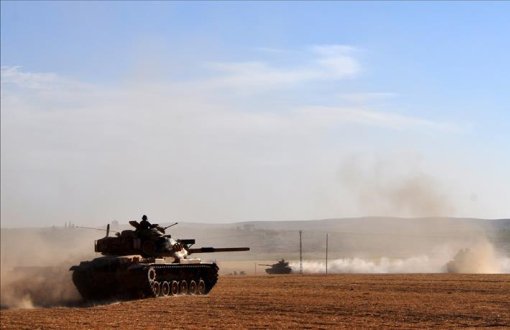 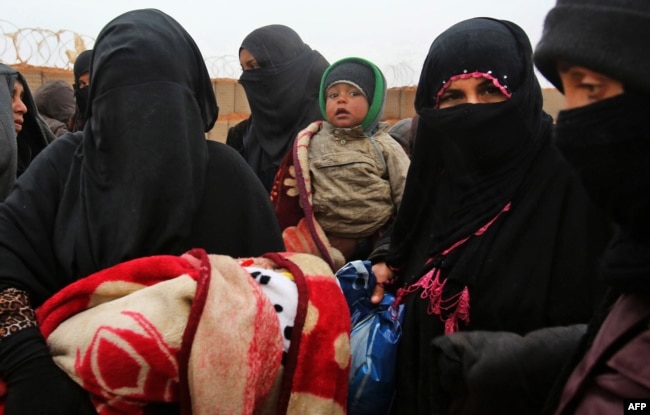 Last month, Turkey quietly began building a wall around the northeastern Syrian Kurdish enclave of Afrin, which it has occupied since early 2018. Amid increased attacks on its soldiers and Syrian militiamen proxies in the enclave, one purpose of the wall is to provide additional security.

Yet there are fears the wall could be a major step by Turkey to annex Afrin and prevent the return of the tens of thousands of Kurds who had to leave their homes there as a result of the Turkish invasion.

“Sources on the ground in Afrin see this as another step of Turkey’s annexation of Afrin into its own borders,” said Mutlu Çiviroğlu, a Syria and Kurdish affairs analyst. “Since last year Afrin has been controlled by Turkey and its Syrian proxies. The civilian affairs are run by Turkey’s Hatay Governorate.”

Çiviroğlu also pointed out that the wall cuts Afrin off from the rest of Syria, in particular areas around the nearby city of Tal Rifaat, where well over 100,000 of Afrin’s displaced are currently living. This may indicate that one of Turkey’s primary aims is to prevent these Kurds from returning and reclaiming their homes.

“Locals are worried that this wall is another step by Turkey to annex Afrin,” he said. “At the same time they expect the Syrian government to give a tougher reaction, but so far we haven’t seen that.”

Çiviroğlu also pointed out that “some other sources say that this wall is designed to prevent the increased number of Afrin Liberation Forces (HRE) attacks, which have recently afflicted serious losses on Turkish soldiers and Turkish-backed forces in Afrin.”

The HRE – the Afrin branch of the Syrian Kurdish People’s Protection Units (YPG) – has targeted Turkish troops and Turkish-backed forces in both Afrin and the town of Azaz, which is part of the Syrian territories Turkey captured from Islamic State (ISIS) in its 2016-17 Euphrates Shield operation. Ankara invariably responds to these attacks by firing artillery at alleged HRE targets in the Tal Rifaat area.

“The cement wall around Afrin represents a visual reminder of Turkish control,” he said. “It is meant to indicate to both inhabitants of Afrin and the world that the border is permanent; Ankara is serious about staying in north Syria. On a more practical level, the wall provides security against insurgents and those who seek to return Afrin to Kurdish control and expel the Turks and Arab militias.”

Notably, the Syrian and Russian governments have not severely criticised Turkey for this action, indicating there is some acquiescence on their part.

“There is a perception among the Syrian Kurds, activists and journalists, that Russia is trying to appease Turkey on this matter so the deal to sell Ankara S-400 missiles is finalised and Moscow gets what it wants in Syria’s Idlib province,” said Çiviroğlu.

At an April 29 press conference, Russian Foreign Minister Sergei Lavrov said he was unaware of the project.

“To be honest, I have never heard anything about a wall around Afrin,” he said. “But I proceed from the fact that the Turkish leadership was adamant in confirming a number of times that Turkey’s anti-terrorist activities in Syrian territory are temporary.”

Syrian Deputy Foreign Minister Faisal Mikdad recently reaffirmed Damascus’s opposition to Turkey’s military presence in Syria and reiterated the government’s determination “to liberate every inch of Syrian territory”, but did not mention the new wall in Afrin.

“The Syrian and Russian governments have been silent about this latest Turkish provocation because they are busy pushing north from Hama against HTS and Turkish control in the Idlib enclave,” Landis said, referring to the jihadist group Hayat Tahrir al-Sham, which controls parts of the northern Syrian province.

He pointed out that there have been suggestions “that Turkey and Russia have come to an agreement in which Turkey will be allowed to extend its control over the north Aleppo in exchange for Syria extending its control over Idlib.”

“While the Turks push south against the Kurds, the Syrians will push north against Arab rebels,” said Landis.

Landis concluded by pointing out that there is some possibility that Damascus “may also be reluctant to stand up for the Kurds in north Aleppo province as a form of revenge against the Kurds of Rojava [Syrian Kurdistan] who have asked for a permanent American presence in northeast Syria.”

Güney Yıldız, a non-resident scholar at the Middle East Institute, thinks the walls main purpose has more to do with security than any long-term Turkish plan to annex the enclave or permanently alter its demographics.

“I think the primary purpose of the wall is to prevent the ongoing YPG – or HRE as the YPG in Afrin calls them – attacks in Afrin,” Yıldız said. “The attacks have increased in the last few weeks and Kurdish officials indicate that they will intensify their attacks during the summer.”

“Cementing demographic changes or annexing Afrin to the Turkish territory doesn’t necessarily require constructing a wall,” he said. “Having said that, I believe that Afrin will be the last place Turkey will withdraw from in Syria.”

Yıldız noted that Turkish officials value the country’s continued occupation of Afrin more than its occupation of the other, much larger, northwestern territories Turkey captured from the Islamic State in the aforementioned Euphrates Shield operation.

“For Turkish officials, agreeing to give back Al-Bab, Jarablus or Azaz or working with Russia to return Idlib back to the regime control is more preferable than ceding control in Afrin,” Yıldız said. “Turkey wants to keep the Kurds as far away from the Mediterranean as possible.”