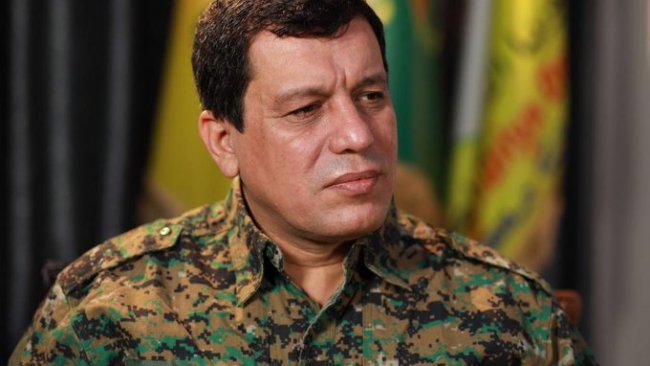 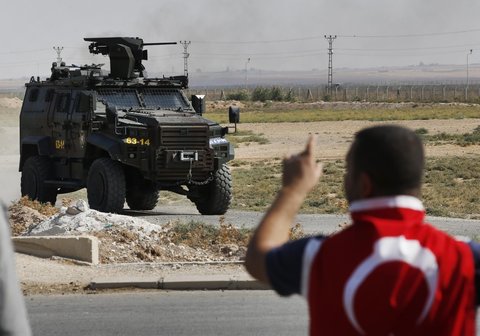 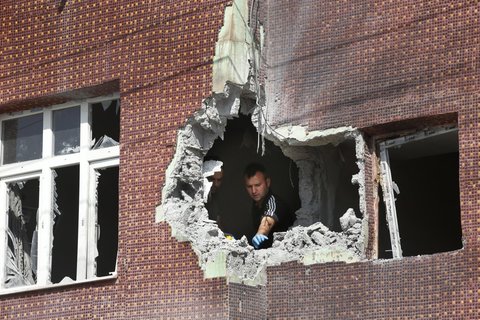 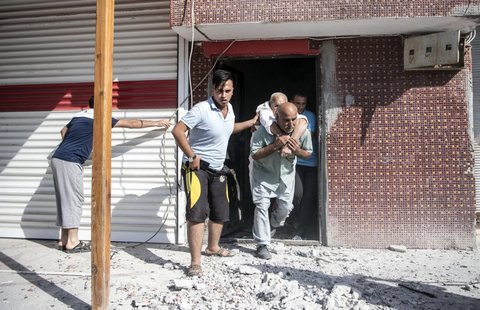 Kurds call it a stab in the back: chaos to come will have many participants 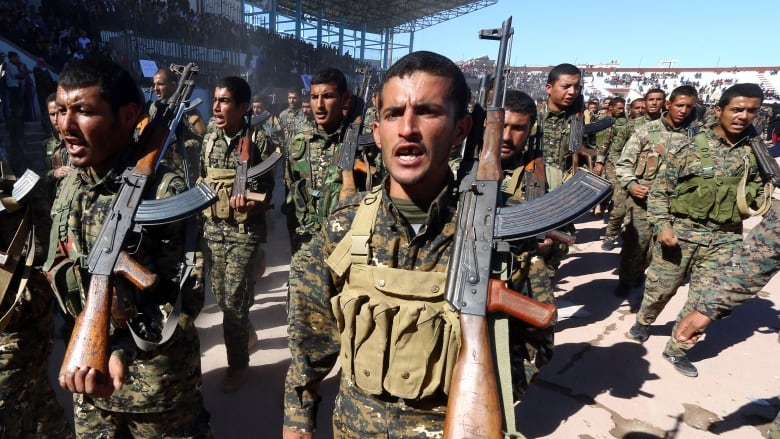 Syrian Democratic Forces (SDF) celebrate the first anniversary of Raqqa province liberation from ISIS on Oct. 27, 2018. They call the U.S. withdrawal a ‘stab in the back.’ (Aboud Hamam/Reuters)

The fallout from President Donald Trump’s decision to remove U.S. troops from northeastern Syria has been swift and deadly, as Turkey has begun its assault on the region and America’s now-former allies, the Syrian Kurds, dig in for what they say will be a bloody conflict on two fronts.

It took just three days for Turkey to move against the Kurdish-led Syrian Defence Force (SDF), but experts warn the humanitarian and political implications both in the region and around the world will be felt for years.

The fuse was lit Sunday after Trump spoke with Turkish President Recep Tayep Erdogan, confirming the U.S. withdrawal from that part of Syria. The departure of U.S. Special Forces troops removed the buffer between Turkey and the Syrian Kurds, which Turkey links to the Kurdistan Workers Party (PKK), a designated terror group in Turkey, the U.S. and the European Union.

“It is certainly going to be a bloody conflict,” Kurdish political analyst Mutlu Civiroglu said from Washington, D.C., noting that while the SDF is led by Syrian Kurds, it includes a wide range of ethnic groups. “The Arabs, the Syrian Christians, Yazidis, they are in no way going to accept a Turkish military presence in their region.”

The Turkish Armed Forces, together with the Syrian National Army, just launched #OperationPeaceSpring against PKK/YPG and Daesh terrorists in northern Syria. Our mission is to prevent the creation of a terror corridor across our southern border, and to bring peace to the area.

Trump’s move sparked feelings of anger, confusion and betrayal among Syrian Kurds, who lost more than 11,000 fighters in the battle to defeat the Islamic State in Iraq and Syria (ISIS). SDF leaders called the move a “stab in the back”.

Leaders of the SDF had little time to react, though, as Erdogan announced the beginning of the assault on Twitter on Wednesday morning.

Now the soldiers who once fought alongside U.S. troops in the battle against the ISIS are fighting on two fronts: Turkey to the north and ISIS to the south, the remnants of the jihadist terrorist group they helped defeat. 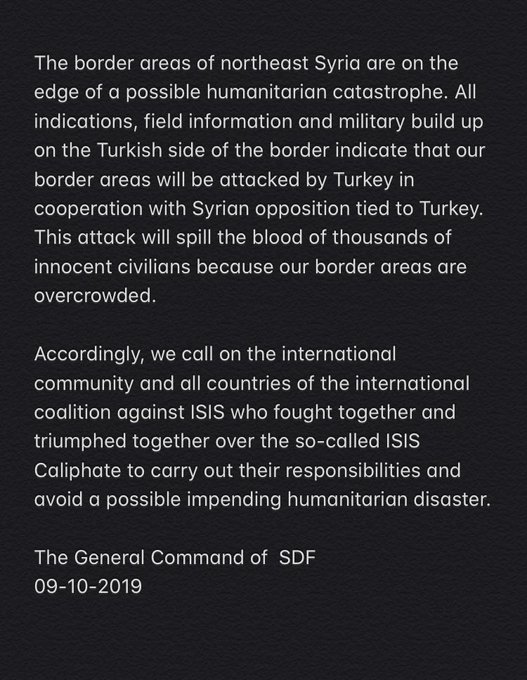 The betrayal is harder to swallow, Civiroglu said, because for the past three months, the U.S. had been mediating between the two sides, overseeing a deal in which Turkey and the SDF jointly administered the border zone. That deal included the SDF dismantling some of its defences in the area.

And though Trump tried to temper his decision by affirming support for the Kurds on Monday, analysts say the U.S. abandonment of the SDF was completed Wednesday when Turkish jets took to the sky, a sign they had been given free rein over the region’s airspace.

A preview of what Kurdish forces can expect came last year when Turkish forces took the Kurdish-held city of Afrin, leading to more than 140,000 people being displaced. A United Nations report documented reports kidnappings, abductions, torture, extortion and assassinations by Turkish-backed Syrian troops who led the assault.

Will Todman at the Center for Strategic and International Studies, said the initial phase of the current operation is quite far-reaching, a sign that Erdogan is not concerned about U.S. and international reaction. 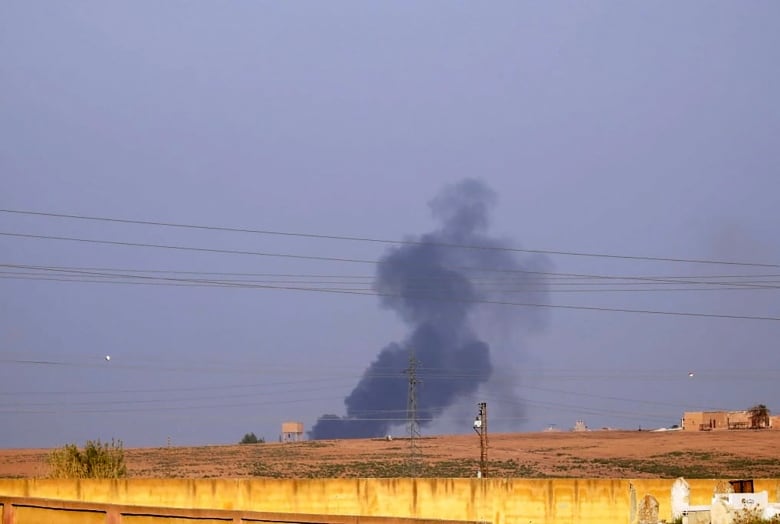 This photo by Hawar news, the news agency for the semi-autonomous Kurdish areas in Syria (ANHA), shows smoke rising Wednesday from shelling by Turkish forces, at the outskirts of Ras al-Ayn in northeastern Syria. (ANHA via The Associated Press)

“Turkish strikes have hit positions along the entire length of the border and as deep as 50 km into Syrian territory,” Todman said. “This indicates that Erdogan has not been deterred by the threat of U.S. sanctions and other international blowback.”

On Wednesday, the five European members of the UN Security Council asked for a closed-door meeting to discuss Turkey’s military offensive.

Even a quick Turkish victory would not be the end, he notes, saying the Kurds would likely mount a violent insurgency.

While fighting Turkey to the north, the SDF was already facing attack from the south in the form of a suicide attack by remnants of ISIS. 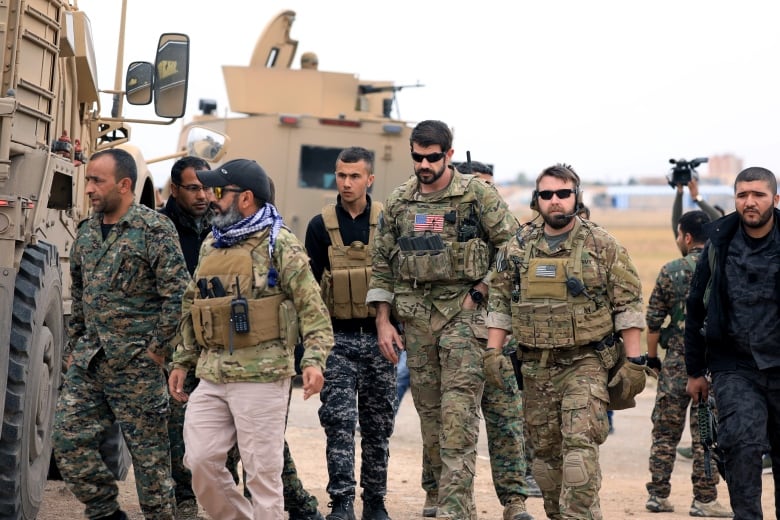 Syrian Democratic Forces and U.S. troops are seen during a patrol near the Turkish border in Hasakah, Syria in November 2018. Turkey has chafed at the U.S. support for the SDF. (Rodi Said/Reuters)

The SDF has been responsible for overseeing the imprisonment of thousands of captured ISIS fighters, but has warned it will be forced to abandon that role to defend itself against Turkish attack.

Retired U.S. General Joseph Votel, who headed U.S. Central Command and oversaw operations in the region, said the decision to abandon the Kurds “threatens to undo five years worth of fighting against ISIS.”

How in Trump’s mind there is some sort of transfer of authority over these [ISIS] prisoners absolutely confounds common sense.– Former U.S. official Brett Bruen

Votel writes in an op-ed in the Atlantic that there are close to 2000 foreign fighters and tens of thousands of ISIS family members in facilities under SDF control, with no clear idea what will happen to them.

“ISIS is going to see this as great news for them, to reorganize. This is going to be a disaster, it’s like a firebomb coming unless something changes,” Civiroglu said.

In a statement Wednesday, Trump reiterated that America has removed itself from the equation, essentially putting all the onus for any negative consequences on Turkey, including the possible escape of ISIS prisoners.

“Turkey has committed to protecting civilians, protecting religious minorities, including Christians, and ensuring no humanitarian crisis takes place — and we will hold them to this commitment,” the Trump statement reads.

“In addition, Turkey is now responsible for ensuring all ISIS fighters being held captive remain in prison and that ISIS does not reconstitute in any way, shape, or form.”

“How in Trump’s mind there is some sort of transfer of authority over these prisoners absolutely confounds common sense,” Bruen said.

Bruen said while Trump has tried to frame his decision

https://www.cbc.ca/news/world/trump-syria-turkey-kurds-analysis-1.5314818as pulling the U.S. out of “endless wars,” he will have the opposite effect of creating more chaos.

“The myopic focus on some general campaign principle that he was going to end foreign entanglements actually works in the opposite, because what he has done will generate more instability.”

Bruen said Trump has also sent a message to U.S. allies that it can’t be trusted to keep its promises. He points out that even the Israelis, long-time American allies, are questioning Trump’s loyalty.

“There is a reflection, a re-evaluation of alliances taking place not just in Kurdish areas but around the world as a result of the erratic and inconsistent policies that this administration has put in place,” he said.

With a Turkish invasion at hand, analyst and freelance journalist Wladimir van Wilgenburg said many in the area may flee across the border into Kurdistan, the Kurdish-controlled region in Northern Iraq. That includes more than Kurds: Arabs fighting with the SDF as well.

“Many Arabs living in SDF-held areas fled the Syrian regime and could face arrest and retaliation and revenge if the Syrian regime comes back, either for working with the U.S.-backed SDF or for being supportive of the Syrian opposition in the past,” said van Wilgenburg, author of The Kurds of Northern Syria.

Todman says the UN estimates more than 758,000 people live in the border region, many already displaced by conflict. Fleeing to Iraq would put them in a region facing violent protests.

While air superiority gives Turkey a distinct advantage, Todman said its end goal isn’t likely to be taking control of a large swath of Syrian territory.

The goal would more likely be to resettle the more than one million Syrian refugees it’s absorbed in recent years. That would create a buffer between Turkey and the Kurdish population.

Todman warns, however, that changing the ethnic makeup of the region would fuel further instability.

Citing an escalation of violence by Islamic State-affiliated women, supervisors at the al-Hol camp in northeastern Syria are calling on the international community to find a solution for thousands of such women and children who are being held at the overcrowded refugee camp. VOA’s Mutlu Civiroglu reports from the al-Hol camp.