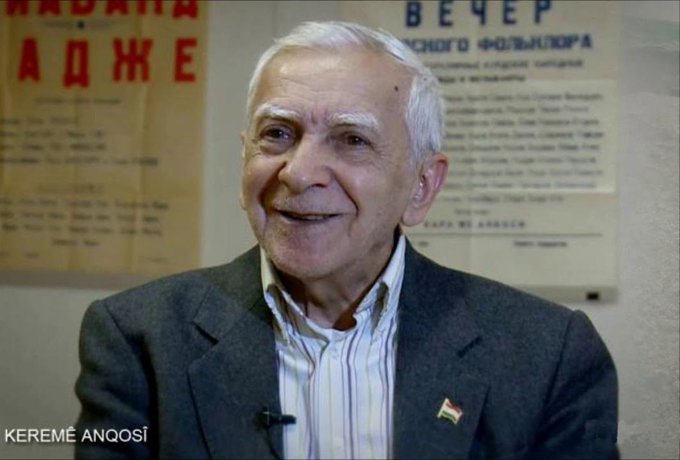 Mutlu Civiroglu is a Washington DC based journalist and Kurdish affairs analyst focusing on Syria and Turkey. He has closely been monitoring the Kurdish People’s Protection Union (YPG) fight against ISIS and other jihadist groups.

His publications appear in various media outlets including BBC, CNN, Vice and Al Jazeera. He regularly writes for Turkish daily Radikal on recent developments from Rojava Region in Syria.

Civiroglu occasionally speaks at panel discussions about Kurds in Syria, and he is frequently interviewed by TV channels in Turkey, Iraqi Kurdistan and elsewhere about Kobani.

If you want my participation to a show, interview me or get a quote on Kobane and other Kurdish related issues, please contact me at mciviroglu@gmail.com

Karapetê Xaço was born in Bileyder (Beshiri) in the Kurdish city of Batman in Turkey, in 1902. He lost his entire family in the Armenian Genocide in 1915 but was luckily rescued and raised by a Kurdish family.

In 1929, after the Sheikh Said uprising, together with many Kurds who were massacred by the Turks, Xaço fled to the city of Qamishlo in Syrian Kurdistan which was then controlled by the French and afterwards joined the French army and served there for 15 years and 3 months. After long years of service in the French army he retired and was offered to be flown to France; however, he refused this offer.

In 1946 Xaço and his family moved to Armenia and settled in Vozkihader village of Yerevan and lived there until his death. After the opening of the Kurdish Service of Yerevan Radio, Xaço began to sing on the radio programs in 1955.

In an interview, Xaço retells his experiences: “In Soviet era it was forbidden to sing about aghas, feudal lords and God. Whenever I was singing a “kilam” they were interfering by saying this one is about an agha, this is about a feudal and god is mentioned in this song! And I always responded, well, what shall I sing about then?”

Karapetê Xaço worked for Radio Yerevan for many years. During these years his voice reached the hearts of each and every Kurd all over Kurdistan. It is hard to imagine a single Kurd who hasn’t been captivated by his “kilams”.

Each time one listens to this kilam, Ape Karapet’s voice, together with the heart-rending mey (traditional flute) of Egidê Cimo, takes you far away to Kurdistan…

Karapetê Xaço befriended the prominent Kurdish writer and poet Cegerxwîn and famous dengbêj Mihemed Arifê Cizirî and Seyîdê Cizirî when he was in Qamishlo. Xaço not only served the Kurdish dengbêj tradition and oral literature by singing hundreds of kilams and passing on them to new generations but also educated many dengbêjs in Armenia among the Ezidi Kurds and inspired countless new dengbêjs and singers to sing and serve the Kurdish music.

Karapetê Xaço was 103 years old when he passed away. He has 1 son and 4 daughters as well as 15 grand children. He was buried on Saturday with the participation of thousands of people including Keremê Seyyad of Kurdish Service of Yerevan Radio, Emerîkê Serdar and Karlenê Çaçan of Kurdish Newspaper Rîya Teze, Çerkezê Resh of Kurdistan Committee of Armenia, Egîdê Cimo, Feyzoyê Rizo, prominent Kurdish musicians and many others. In his funeral, his son Seyrosh Karapet said “although my father was of Armenian origin, he felt closer to the Kurds, and for this reason he served Kurdish music as a dengbêj. He always felt deeply the grief and sorrow of the Kurdish people who have long suffered at least as much as the Armenian people and wanted to express this pain with Kurdish kilams”.

Çerkezê Resh of the Kurdistan Committee of Armenia, in his speech said, “Karapetê Xaço has made priceless contributions to Kurdish dengbêj tradition and music and he was buried in to the heart of Kurdistan. When I was in Amed, for the Kurdish Language and Literature Conference, everyone was asking about Karapetê Xaço’s situation with great interest and I myself forwarded those special wishes from the hearth of Kurdistan, Amed to him. He was very happy to hear that Kurds had never forgotten him. Karapetê Xaço was not only a great dengbêj but also a bridge of brotherhood between the Kurdish and Armenia peoples. We will never forget him”.

Ape Karapet has always had a very speacial place for me. Each time I listen to his voice, I get lost in thoughts and begin to a trip from Mount Ararat to Cizira Botan, from Lawikê Metînî to Dewreshê Evdî, from to Filitê Quto to Eyshana Elî, from Xezal to Edule, from Evdalê Zeynike to Zembilfrosh. When I first heard he passed away, I immediately called Keremê Seyyad of Radio Yerevan, Kurdish Service with the hope of hearing that the news was untrue. Unfortunately it was true and Keremê Seyyad was very sad but he was trying to give me consolation. Each time I was calling Yerevan, I was asking Apê Karapet’s situation and each time Keremê Seyyad was assuring me that he was fine. What a pity that the last time I called him it was different because Karapetê Xaço had decided to go and leave behind the kilams as orphans…

Thank you very much the master of Dengbêjs.

Dengbêj: Kurdish musicians who have very special talents to sing kilams which are special kinds of ballads mixture of a song and story which is generally telling a historical story or event as well as the life of a Kurdish hero or heroine, which were passed out from mouth to mouth for hundreds of years.