We, the Commission of Humanitarian Relief and Support in the Democratic Autonomous Administration of the Kurdish Cantons (Jazira, Kobane and Efrin), welcome UN Security Council Resolution 2139 to boost humanitarian aid access in Syria.

We hereby commit to facilitate the implementation of the Resolution 2139 and the 2 October 2013 statement by the President of the Security Council (S/PRST/2013/15) including through facilitating the expansion of humanitarian relief operations, in accordance with applicable provisions of international humanitarian law and the UN guiding principles of humanitarian emergency assistance. 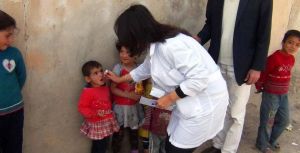 The autonomous region of Rojava (Western Kurdistan/North of Syria) is controlled and administered by multi-ethnic regional communities in a transparent, democratic and nonpartisan fashion. The region has been deprived of international humanitarian aid due to the siege imposed by the regime and armed extremists groups. Local communities organized themselves and established their institutions and councils in order to administer their own socio-economic and political affairs and to protect their territory from the repercussions of the ongoing brutal sectarian civil war.

The Rojava region has been relatively safe and has successfully managed to become a safe haven for internally displaced Syrians. The Autonomous Administration has established the Commission of Humanitarian Relief and Support in co-operation with the Kurdish Red Crescent (Heyva Sor a Kurd), a regional humanitarian NGO serving local communities with limited resources.

The Autonomous Administration in the three Kurdish Cantons will take appropriate steps to ensure the safety and security of United Nations personnel, those of its specialized agencies, and all other personnel engaged in humanitarian relief activities, without prejudice to their freedom of movement and access and to assure the delivery of relief to all persons in need.  The Administration is also very keen and willing to co-operate with the UN aid representatives and personnel by ensuring the accessibility of border crossings.

We would like to suggest that the Commission of Humanitarian Relief and Support of the Autonomous Administration nominate Mrs. Senam Mohamed as focal point for coordination with the United Nations to facilitate the fair distribution of aid under the direct supervision of the UN representatives and monitored by UN officials.

Mrs. Mohamed is the Co-chair of People’s Council of Western Kurdistan and her contact details are:

Finally, we welcome the UN resolution and are willing to co-operate with you in order to deliver humanitarian supports to local communities.

We look forward to hearing from you.

On behalf of the Democratic Autonomous Administration in Rojava